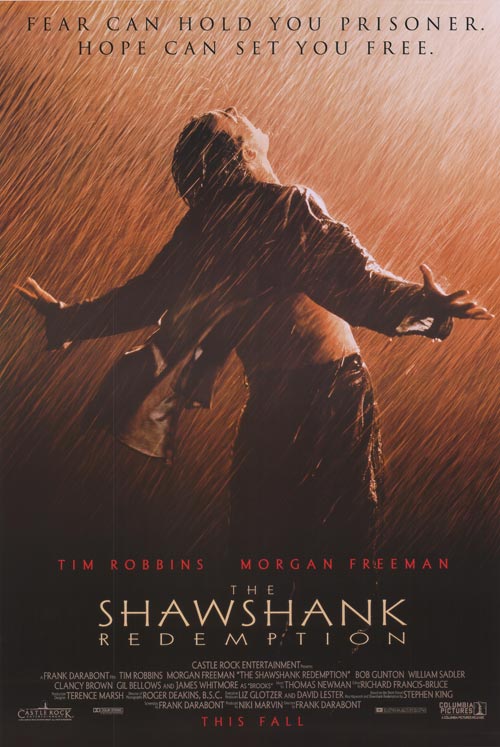 Good grief… This poster sets the stage for disappointment.

The Shawshank Redemption is regarded as one of the best films of the 1990’s. The film apparently disappointed in theaters but burst into popularity in the home video market as well as on TNT. For those unaware, like I was, the movie is about a banker named Andy who is given two life sentences in prison following the murder of his wife and her lover. He meets Red, an inmate who can get anything from the outside, who shows him the ropes and tells him that there is no hope so just get used to being in Shawshank. Andy repeatedly displays that he can be the change in the system and gradually improves things. After a series of happenings, he manages to escape by having dug a small tunnel over the course of a couple of decades. When Red is finally released for good behavior, he finds out where Andy has gone. They presumably live happily ever after. END_OF_DOCUMENT_TOKEN_TO_BE_REPLACED

Not much time for an update, but I wanted to share some recent game experiences.

Online multiplayer is a world from which I’ve generally kept my distance. It involves a time investment that I’m not willing to make due to the low reward in the end and potentially obnoxious players that make the game altogether unpleasant. Every now and then I’ll dabble in something offered for free or for cheap, like some League of Legends-style Lord of the Rings that released on PS3 nearly a decade ago and Fat Princess, a game that I’m surprised did not receive a sequel. I even gave Warframe an hour. Nothing was a must-play.

This past week saw the launch of Mobile Suit Gundam Battle Operation 2 in English-speaking territories and the beta of Project REsistance, the new Resident Evil game. I played and had fun. Gundam was a no-brainer because I’m taken by the mecha designs and the, “Whoa! I’m a pilot!” of it all. Project REsistance was something else. You can look up full reviews of the beta to read about the asymmetric game play in this 4-vs-1 game, so I’ll spare you those details. What I can tell you is that it’s a unique experience to play a clustered action horror game and not be able to expect anything due to the random element of the player on the other end.

And that helped me to realize what games like these do well. The randomness of other players is chaos. And the chaos is a unique story that you experienced and can tell. It’s like Shadow of Mordor but on a larger scale. I can tell the story about how the Tyrant emerged out of nowhere in Project REsistance and I kicked it with Tyrone before running away. I can tell a story about how disabled a bomb in my own base and then blasted an enemy pilot with a bazooka not once but twice in the same session of Battle Operation 2. And those are fun stories because they were not expected, and someone else playing the game may not have a story quite like that.

Maybe it’s not what everyone gets out of those games, but those are my takeaways. 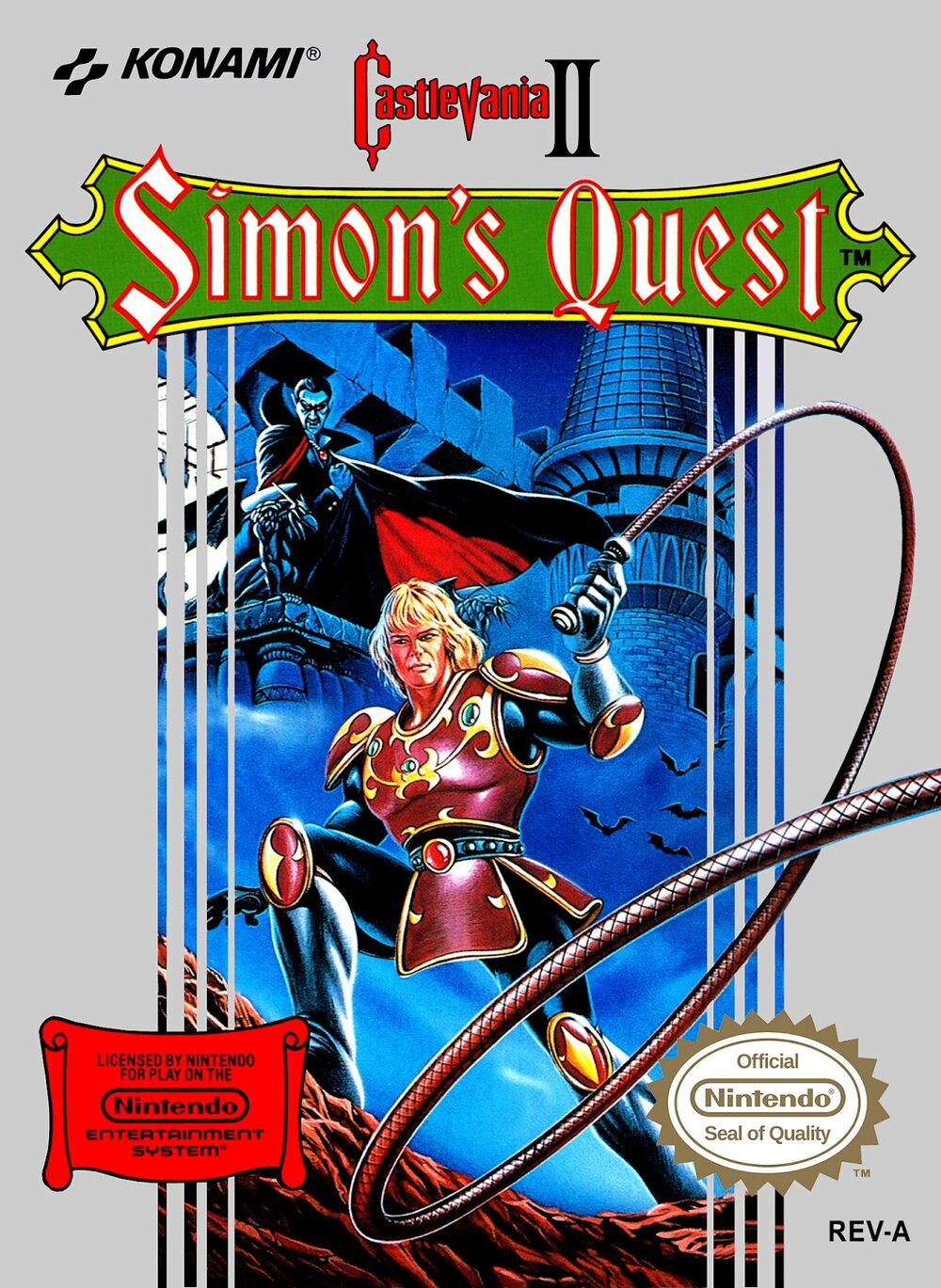 Having grown up through the dawning of the age of Nintendo Power, I was pretty much convinced that any game that was allowed to grace the cover of the magazine was an instant classic. Castlevania 2: Simon’s Quest has perhaps one of the most iconic — and unintentionally horrifying — covers in the history of the magazine. That solidified to me that it must have been a great game. A game I never got to play but still great. END_OF_DOCUMENT_TOKEN_TO_BE_REPLACED

Anime fans in the US lucky enough to live near movie theaters showing Fathom Events had the opportunity last week to watch Studio Trigger’s first original animated film, Promare. For those familiar with the work of the studio, which came into being following many staff members’ contributions to Gainax’s Tengen Toppa Gurren Lagann and most well-known work being Kill La Kill, the best way to describe the film is simply “Peak Trigger.” Over the top absurdity and action that is very, very well animated. The cliché “a feast for the eyes” is a more than apt description of what you get. And while I haven’t seen it on the small screen yet, this is one of those movies that needs to be seen on the big screen to be appreciated. END_OF_DOCUMENT_TOKEN_TO_BE_REPLACED

One of the most intriguing games to come out in the past decade, and one of the major reasons I looked forward to getting a PS4, is Middle-earth: Shadow of Mordor. The major draw for the game is what is called the Nemesis System. This feature creates an extra level of drama for the player outside of the main story. Interactions with the enemies become more meaningful because each encounter actually means something. Uruk, basically the bosses of the orcs, have procedurally generated features and names as well as strengths and weaknesses. You learn of these weaknesses by interrogating random orcs, and you can exploit the weaknesses in battle. However, if you defeat an Uruk, it does not mean the Uruk is completely out of the game. You may scar them, and your means of defeating them may no longer work in the next fight. Defeated Uruk may show up during one of your missions and call you out for defeating them last time — or for running away. Later in the game, you may send orcs back to them to make death threats, powering up the Uruk (resulting in a better loot drop) and giving them something else to yell at you about when you fight them. This is a fascinating feature of the game that I’m sure I’ll return to from time to time. END_OF_DOCUMENT_TOKEN_TO_BE_REPLACED 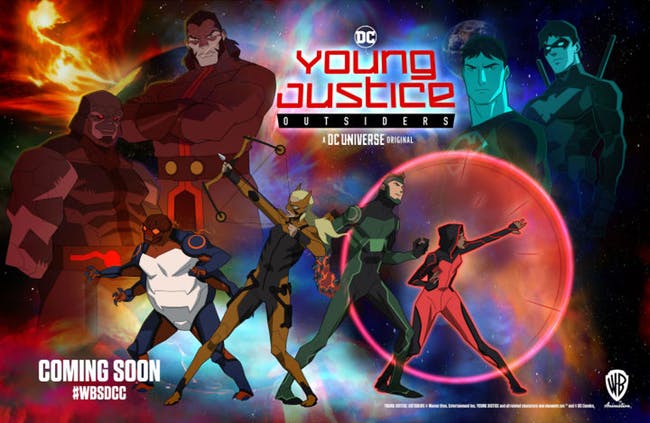 It was good; it wasn’t great. END_OF_DOCUMENT_TOKEN_TO_BE_REPLACED 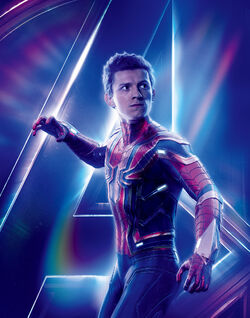 At the same time, so what? END_OF_DOCUMENT_TOKEN_TO_BE_REPLACED