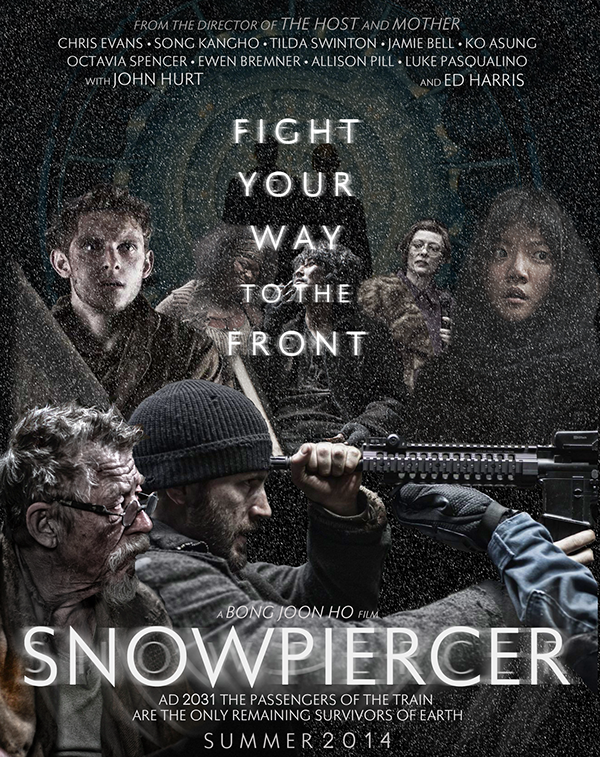 If I could just have a brief moment of your time, I would like to discuss how it’s possible to have one simple but significant scene that ties a whole movie together. I recently — finally — watched the film Snowpiercer. Coming from the director of the Korean film The Host, I had no doubt that it would be an entertaining film. It was! It is a story about a post-apocalyptic ice age in which the survivors live on a train that endlessly loops on a track, with the areas of the train essentially broken down by class. The film follows a group of people living in squalor in the tail end who have had enough, especially after the kidnapping of some children, and fight their way to the front of the train.

Toward the end of the film there is a scene in which Chris Evans’ Curtis Everett explains the history of the tail end and just how desperate it was in the beginning. Because people were starving, they started eating the weak and even the babies. He describes one incident in which a man murders a mother in order to feed on her baby, but then the man is stopped by Gilliam, his mentor and father figure. Gilliam sacrifices his own arm so that people could feed, and other tail end folks started sacrificing their limbs as well. This had a profound impact on the man, who it turned out was Everett himself. He even tried to sacrifice his own arm, but he could not do it. The baby would grow up to be his best friend. The level of desperation they reached along with the epiphany that they can and deserve better — as well as to be better — was a catalyst for his revolt and fight to the front of the train.

This monologue at first just contextualizes the beginning of the movie and the relationships Everett has. It explains the various individuals with missing limbs. It shows why the protein blocks they receive for food are so coveted despite being simultaneously reviled. And the viewer thinks that’s all the scene was meant to do. Then Everett reaches the front of the train where he meets Ed Harris’ Wilford, the conductor and designer of the train. Wilford tells Everett that the revolt was expected and by design, to excite the train. He explains that Gilliam was in on it and essentially groomed Everett to be the leader of the revolt. He then says that he did not expect Everett to be so successful, but it made him out to be a worthwhile successor because he is willing to do what it takes to get to the end — and they reflect on the wake of destruction and the many dead bodies Everett left behind, including his best friend. Then he shows Everett how the train works. Where parts were broken, they were replaced by children of a certain age who fit into the various compartments. And Everett should be fine with it because he knows that children are a means to an end. Of course Everett refuses and, in saving a child, he finally sacrifices an arm.

The monologue not contextualizes the beginning of the film, it also ties it all together with the end. Without that monologue we wouldn’t have the betrayal, we wouldn’t have the mirroring of the Everett and Wilford characters, and we wouldn’t have the setup for symbolism in Everett’s sacrifice of a limb for a child. The information from the monologue could have been delivered throughout the film, but there was a greater impact to its happening all at once just before facing the villain and orchestrator of all of the suffering. It makes the monologue the best and most memorable part of the film. It not only has to convey a history of pain but also tie it together to the decision that would be made about the future.