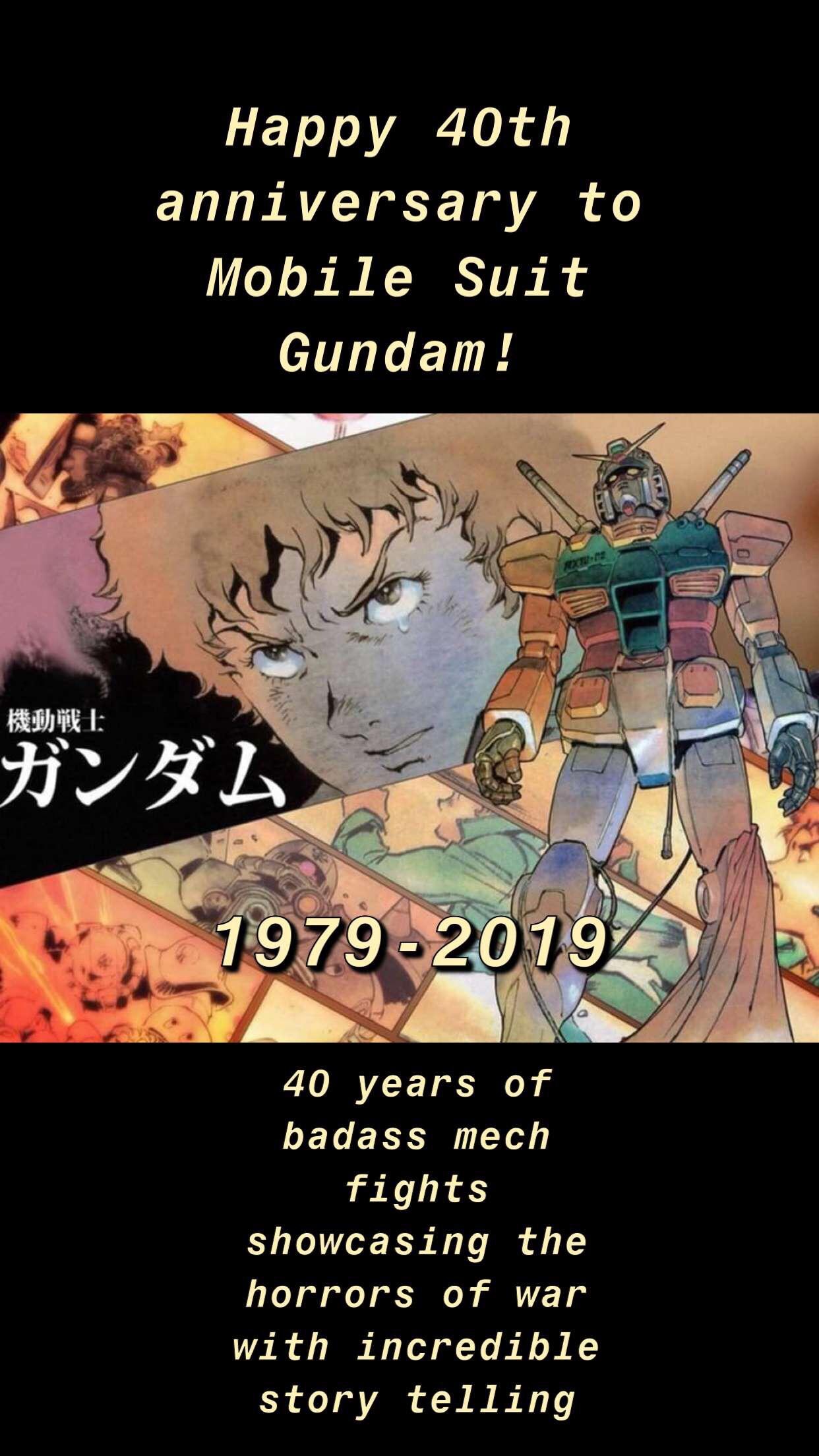 It’s the 40th anniversary of the original Mobile Suit Gundam series. A user on Reddit celebrated by posting the above image that he created. It sparked a realization in me: the messaging in the majority of Gundam series is ineffective. The stories are generally fine and each series is enjoyable in its own, but the yarn it tries to spin about the horrors of war just doesn’t work.

Reddit user Rodrigs99 unintentionally makes the point in the sentence on the bottom by so easily mentioning both the “badass mech fights” and “horrors of war” at the same time. The explicit message the story tries to tell is that war is hell, ruining everything that it touches. On the other hand, it glorifies the violence. There are good and bad people on both sides of the war, but our heroes are big damn heroes engaging in big damn violence that is entertaining as all hell. If war is hell, it’s also a hell of a war.

The poor messaging is not necessarily a fault of the writers or the medium. It really falls on the people financing the production, the television network along with Sunrise. The point of Gundam, and this is me putting my skeptical spectacles back on, is to sell merchandise. Cool looking mecha and enjoyable fights are going to make that happen. If the show were to show tragedy every time someone stepped into the cockpit, you wouldn’t have kids watching and eager to reproduce the scenes with their own toys. You’d probably leave them shell-shocked.

The very first series is the most guilty of glorifying combat. If you read the novels that Yoshiyuki Tomino would later go on to write, you would find a much more serious version of the story. Instead, the TV series is bright and colorful with quite upbeat music. The first victory in the war that the viewer sees is Amuro blowing up an enemy Mobile Suit with his Gundam. This blows a hole in the side of the colony on which they’re stationed, and it seems fairly underplayed. A massive hole in the side of a space colony full of civilians should be played like something akin to a bomb exploding in a city. There is some fallout, but it seems subdued. And purposely so. Because Mobile Suit Gundam was a cartoon for children.

The follow-up series, Mobile Suit Gundam Zeta, is much better about staying on message. Each step of the way, tragedy befalls Kamille, our protagonist. It’s almost comical the lengths to which the series went in trying to crush the guy. He watches his parents die while they’re being used as hostages, really, to hurt him despite his being on a ship with rebels who served in the previous war. He befriends someone whose whole being was altered and his psychologically damaged, only to watch her get killed by the same guy responsible for his parents’ deaths. He watches another altered woman face her own tragedy. During the long final battle he watches a number of his friends die. Due to his esper-like ability, he is able to carry their spirits with him. Then he is basically lobotomized psychically. The color palette is slightly darker in this series, the soundtrack more somber, and sometimes it makes the viewer sit through the more tragic moments.

I mean, it’s good at sharing the message more implicitly than the original. But it still glorifies the violence. The Mobile Suits do some awesome things in the series. It also makes the previous series’ rival and antagonist over to the protagonist’s side, indicating that there is redemption in violence so long as violence is committed for the right cause.

Subsequent series are, in general, no better. (There are exceptions.) If the series weren’t made in Japan, it could be accused of being propaganda for the military. However, at the time the original Gundam series was created, the Japanese were not allowed to have a military. The series is just about selling gunpla (plastic models) and other related merchandise.

Despite what I consider a valid criticism, that does not mean that people should no longer watch or support the Gundam franchise. It just means to be aware. Much of the media we consume is problematic in some way. Acknowledging that is helpful. Calling it out is more helpful. Dissatisfaction among viewers can result in stories in the future that address the concerns or take the story in a new and potentially exciting directions. At least that’s the hope. We can’t be fed the same clichés over and over again. At some point a studio will take a risk and give us something even more exciting.