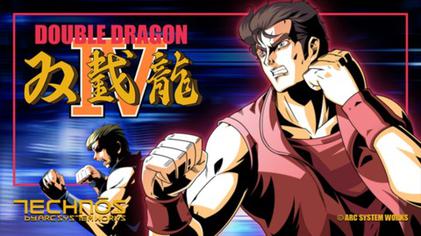 The acquisition of Technos Japan’s IP by Arc System Works was a move celebrated by fans of brawler games. After all, that meant that Double Dragon and River City Ransom were now in the hands of the developer of the Guilty Gear series and Dragon Ball FighterZ – the current (as of February 2019) most popular fighting game out there. This was meant to be a perfect marriage.

So what went wrong with Double Dragon IV?

The only thing that makes even a modicum of sense is that Arc System promised a release date for the game but all of the top designers were locked into either Dragon Ball or the latest iteration of Guilty Gear/BlazBlue. That left junior team members who could definitely put a game together but didn’t know how to innovate so much as immitate. The result is a Double Dragon game that looks and plays like an amateurish fan game.

On paper it should work, especially since I’m an advocate of minimalist design philosophies. Just as Mega Man 9 is a love letter to Mega Man 2 (and I’ve talked about why this works), Double Dragon IV is a love letter to Double Dragon II. But the difference between the two designs is that MM9 attempted to improve upon MM2 by learning from its failings and accentuating where it succeeds while DDIV seems to think that the only flaw that DDII had was that the stages actually had length to them and stopped you from facing as many enemies on screen as possible. Because for some reason it’s reasonable to believe that being swarmed by enemies is the fun part of the game.

Arc System Works failed at their revival of the franchise, and I’m not the first one to say it. But what I want to point out is that the philosophy of “If it ain’t broke, don’t fix it” is meaningless if people don’t actually understand what is working. It’s why there are hundreds of terrible Super Mario Bros. clones on the internet but Nintendo still manages to wow us whenever they release a new 2D game. (Their 3D games are great as well, but their 2D designs show that they continue to learn from what worked before.) Nintendo gets it because they study and they test their designs – and they don’t rush things out.

It would make sense to me if Arc System just didn’t care. They wanted to keep a promise, but they weren’t planning on a large or expensive game. Well, they succeeded there. They produced a $7 game that somehow manages to make players feel like they were ripped off. Sure, they through some unexpected bonuses in there, like a tower survival mode and the ability to unlock and play as defeated enemies. I’ll admit that the idea of playing as Abobo or Burnov is actually pretty neat, but it’s hard to get too excited for the replayability aspect when the core game play is sorely lacking.

DDIV takes the game mechanics DDII and adds four additional moves. These four moves include a flying, spinning headbutt that makes an impressive sound like the flying knee that fans of DDII love. So it must be useful, right? It does have impressive knock-back, but a basic jump kick can cancel it. Ducking avoids it. Just as ducking avoids the knee. While the game makes it more difficult for players by placing more enemies on the screen, it provides nothing in terms of clearing the crowd. This became fairly standard in brawlers in the 90’s thanks to Final Fight and made even more popular in Konami’s many licensed brawlers such as X-Men, Teenage Mutant Ninja Turtles, and even The Simpsons. Even Million’s Double Dragon Neon back in 2012 provided an assortment of crowd-clearing attacks, making them not foreign to the property. That game, while not swarming the player as much as DDIV, also provided new methods of avoiding attacks beyond simply moving the character one of eight directions. According to this design team, dodging is foreign technique that only the enemies should have.

What’s most disappointing is not simply that the game shows a lack of interest in learning from past shortcomings in the original titles but also the lack of interest in learning from the successes that followed it. Between Double Dragon II and Double Dragon IV are SIX other Double Dragon games, including a game already acknowledged as the fourth in the series despite being called Super as opposed to IV. Each game provided something enjoyable even if the games themselves were not perfect. Double Dragon III introduced running, a third player, an in-game store, and the ability to play as other characters (the only lesson learned, it appears). Super Double Dragon introduced blocking, counters, and differences in game play between the Lee brothers. (It also had a weird, over-powered system of powering up your characters for free. I shouldn’t stop game rentals in one night.) Double Dragon V and Double Dragon (released only on the Neo Geo) are fighting games and right to be ignored. Double Dragon Advance provided new character designs that really differentiated the brothers and, really, overall design-wise already accomplished everything Double Dragon IV aspires to do. Then there’s Double Dragon Neon that takes it all to another level by being an homage to the original games as well as parody of 80’s pop culture, introduces dodging, crowd-clearing attacks, and the ability to take on and upgrade different styles of play. Arc System Works’ deliberate ignorance of all of these games is not only foolish but straight up disrespectful to the previous designers.

I already spent my money, though, so I’m going to play the game some more. I beat the story mode and completed about 20 levels of the tower survival mode on my first attempt. I’m going to wring all of the fun I can out of this game and figure out if there’s anything that I’m missing. I don’t want to believe that Ark System could botch things this badly, but it’s unlikely I’ll be proven wrong.

UPDATE: I’ve learned that at least three of the individuals who worked on the game are veterans of the franchise, including director Yoshihisa Kishimoto who created the series as well as the Kunio-kun (River City Ransom) series. Blows my theory out of the water since that means that they had Double Dragon royalty leading the charge. Maybe they thought they knew best because what they produced 30 years ago was great 30 years ago? I appreciate that they kept the project small, but I guess some designers are incapable of learning from their own work and the works people have built off of theirs.